Behind the scenes with the Household Cavalry

Behind the scenes with the Household Cavalry 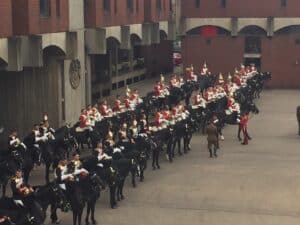 The 2nd of June didn’t start like any other day.  At 5am I got up and joined some members of the HOYS team to board a train from Birmingham to London, usually on any other day a 5am wake up start would see me having to set 10 alarms in order to finally drag myself out of bed.  But not that day.  It was straight out of bed, make myself presentable and get on the train.  Why? Because unlike any other day this morning we were going to have the once in a lifetime experience of visiting the Barracks of the Household Cavalry where we would watch the dress rehearsal for the upcoming Queen’s birthday celebrations. I knew that Saturday the 2nd of June was going to be an unforgettable 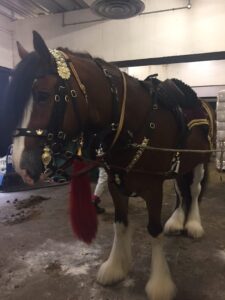 day but even I didn’t quite anticipate how awe inspiring it would be.

The Household Cavalry are one of four displays performing at the Horse of the Year Show’s 70th anniversary this year, I remember in 2014 we did the display together at HOYS.  They brought such atmosphere, action, and vibrancy to the event. I have many memories from watching them and just being inspired by not only the display but how it is rooted in tradition and history.  We felt honoured to share the stage with them back then and I never would have imagined that four years on I would be headed to visit their barracks.

For a country girl from Scotland, every opportunity I get to go down to London leaves me fascinated but the fact that you have this hub for Equestrianism in the centre of London just leaves me dumbfounded – it’s amazing! We met Captain James Faire, musical ride officer at the gates to the Household Cavalry barracks which is located just beside Hyde Park in London. He was so welcoming to us and we were so appreciative that he took time out of his incredibly busy day to not only show us around the barracks but also to provide us with as much information as possible especially regarding the history and tradition in which the Household Cavalry beholds.

The Household Cavalry have had an extremely busy year so far, most notably their involvement in the recent Royal wedding – which only served to add to our excitement in getting a behind the scenes look. It is exciting to think that horses which we saw on our screens throughout the broadcast of the Royal wedding will be gracing the HOYS stage later in the year.

As James informed us: “The musical ride horses which are selected to perform at HOYS will be the crème of the crop, the horses and the men you will see at HOYS are the best in the Household Cavalry regiment.”

What first struck me was how they manage to have this Equestrian network and community thrive and run out of what resembles from the outside, a multi-storey car parking lot. Within the household cavalry barracks there are 250 of the most beautiful, well kept, well behaved, toned, athletic horses all ready for their important role as part of the household cavalry.  If I could, I would have taken numerous horses back with me to Scotland, beautiful in nature and of course on the eye.

The Armed horse board fly over to Ireland twice a year in order to recruit new horses which are to be introduced into the regiment. Horses must be 16hh or higher, they need to be as black as possible and they need to be well built in order to carry the load of soldier in full kit.  They also need to be strong and able to carry soldiers around the streets of London every day.

One of the aspects of the visit I found most interesting was when James talked us through the different tack used on the horses how it is steeped in tradition: for instance its purpose and use when heading into battle in order to protect both horse and rider.  I had always wondered – yet never asked – why when performing at HOYS the soldiers wear two different outfits some in blue tunics with red plumes (The Blue and Royals) and the Lifeguards in red tunics with white plumes. James very kindly ran us through the distinctions between the two.  It will be all the more fascinating watching t 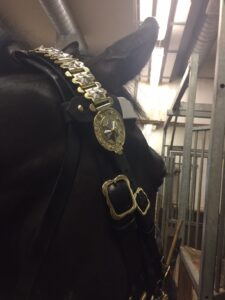 hem at HOYS this year knowing more about the history of the regiment.

After a guided tour of the stables, we were taken to a cafeteria three floors up which looked down on a central open space below – in my opinion we had the best seats in the house!  We watched as 250 horses gathered in the space, lined up in perfectly straight lines as an inspection of both horses and tack took place.  It was a sight to behold watching all these magnificent horses come together.

After the inspection they set off through the streets of London heading for Buckingham Palace with us in convoy, on foot behind. For a rehearsal for the Queen’s birthday it was amazing to see the vast amount of people, tourists and locals alike, stopping in their tracks to watch the amazing procession through the streets before the Household Cavalry congregated in front of Buckingham Palace – it was a sight to behold.  The national anthem rang out which marked the end to an unforgettable visit. It is easy to see why people travel from all over the world to have a taste of such history and tradition, perfectly personified by the Household Cavalry.

It is with great thanks to the Household Cavalry that we were able to have such an amazing day learning all about tradition and each individual part that contributes to the big spectacle that we see at events like the Royal wedding or the Queen’s birthday celebrations.  Now, more than ever, the excitement is building for the Horse of the Year Show where the Household Cavalry will be performing every single day and twice at the weekend! As Captain James Faire says “expect excitement, glamour & glory” from their display.  I have no doubt their performance is going to leave HOYS audiences with lasting memories exactly as it did with me.

Take a look at my video from my visit here: https://youtu.be/tYNenlI8oyE

Just three and a half months to go…..see you in October HOYS!